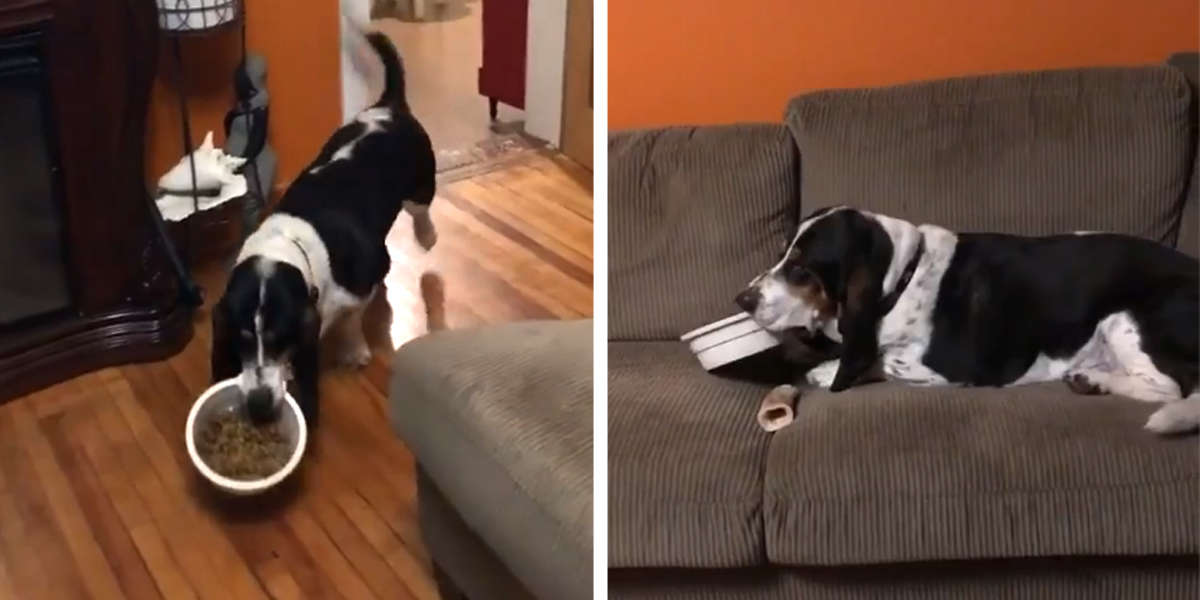 Sure, eating food from a bowl on the floor is fine for most pups — but Murphy’s dining preference is a little different.

He prefers eat and chill.

One day, about two years ago, Murphy had a breakthrough. His family had filled his dog bowl in the kitchen, like always, before settling in the other room to watch TV as they ate their own meals.

Suddenly, the dog decided to join them — acting like it was no big deal.

“My daughter and I were sitting at opposite ends of the couch eating our dinner when he brought his bowl in and hopped between us, gently placed it down and began to eat,” Audrey Waito, the dog’s owner, told The Dodo.

Murphy’s done the same thing ever since.

Waito and her family hardly mind having Murphy eat with them on the couch — in fact, it’s something they welcome.

Though Murphy is quite careful not to spill as he carries his bowl, there have been a few mishaps. These days, when mealtime comes, Waito usually saves him the trouble.

“I started just putting his bowl on his spot on the couch,” she said.

By dining on the couch like everyone else, it’s clear that Murphy considers himself to be a bona fide member of the family. And he’s not the only one who thinks so.

“He is my other child,” Waito said. “He’s quite spoiled.”

How to pair the receiver with remote? (DOG CARE TRAINING COLLAR)
Happy National Black Cat Appreciation Day from my family to yours! #shorts
Kitten Who Was Found Foraging for Food, Transforms into a Happy Indoor Cat in 3 Days
Funny cats and dogs – Try not to laugh or grin while watching animals #7
Bison Can Lose 200 Pounds During Mating Season, and Other Facts About Our National Mammal