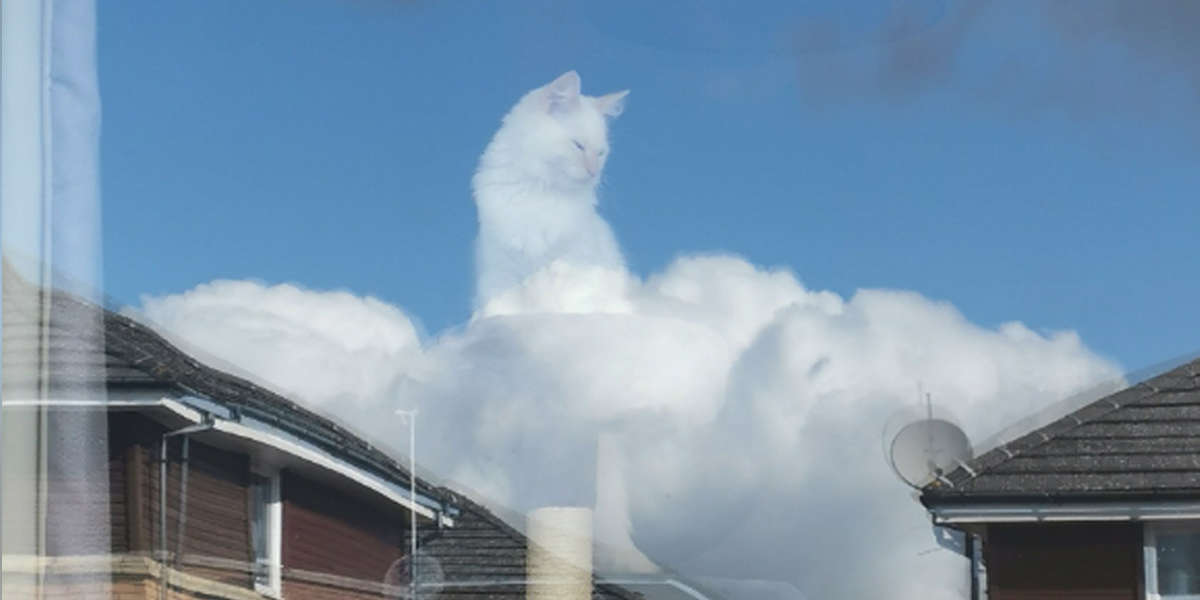 This is Clyde — a sweet white cat with a larger-than-life personality.

It’s not an easy quality to capture in photos. But by pure accident, Clyde’s owner did just that.

Clyde lives with Twitter user Amanda Hyslop and her boyfriend. At home, he likes to keep tabs on things going on both inside the house and outside the window — like some furry, omniscient deity.

That comparison was recently captured in a picture.

“He has a habit of staring at us from the front window whenever we leave,” Amanda told The Dodo. “I was trying to capture that when the clouds lined up perfectly with his cat perch.”

Just like that, Clyde took on the appearance of a heavenly being — a godly cloud cat, if you will.

Seeing the photo made Amanda do a double take.

“Took a pic of the cat looking out the window and accidentally turned him into some sort of god,” she wrote on Twitter.

Was the photo really an accident? Or was it a sign? Clyde’s not talking.

“I definitely think he would love the photo,” Amanda said. “A lot of people on Twitter said I simply captured his true form and I think they’re right.”

Stray Kitten is So Excited to Be in a House that She Starts ‘Supervising’ Everyone
Class Pet Sleepover + More Nursery Rhymes & Kids Songs – CoComelon
Blippi Cares For Pets At The Animal Shelter! | Fun and Educational Videos for Kids
Cutest Silly Pets | Funny Pet Videos
Ask the Cat Behaviorist with Laura Cassiday: Jealousy Between Cats, Feeding Frenzy, and More