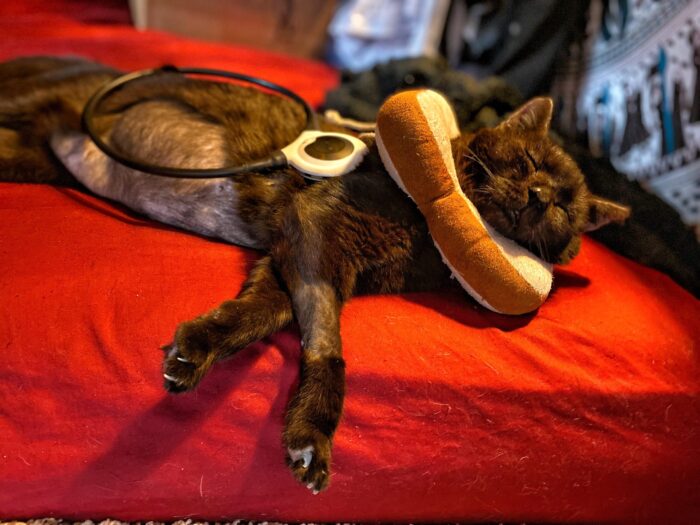 Today’s featured kitty in our series of cats who have been helped by the Assisi Loop is a very special cat named Dusty. He was rescued by FieldHaven Feline Center following the horrific November 2018 Camp Fire, horribly burned over his face, feet, legs and ears.

For the next several months he was cared for at UC Davis, where he received frequent bandage changes and surgery to amputate burned toes and on his eyes for a non-fire related condition. When he left UC Davis, he came to FieldHaven sporting a roly-poly body, a raspy snore because of fire damaged lungs, a singed coat that felt like a Brillo pad, shortened, fire-scarred ears, missing toes and burn-scarred face and legs. And he is FIV positive.

Besides captivating volunteers with his cute button nose and raspy purr, Dusty spent time as a hospice cat for one of the FieldHaven volunteers during the last weeks of her life. He also made an FIV educational video.

Dusty was adopted by FieldHaven volunteer Elizabeth in April of last year. Elizabeth is a catastrophe rescue volunteer who worked with the organization from afar to help reunite displaced cats with their owners. “After months of volunteering, I drove from Austin Texas to Fieldhaven to meet the many amazing people with whom I had put in so many hours and ended up leaving there with Dusty,” says Elizabeth.

It all started with a flea bite

Dusty, his feline friend Dew and a friend of Elizabeth’s drove across the US, from Oregon to Virginia, visiting places like Yellowstone Park, Boise Idaho, Jackson Hole, Custer South Dakota, Chicago, Philadelphia, and Baltimore. “We rested in Massachusetts for a short respite and that is when Dusty got bit by a flea,” Elizabeth told me. And that’s when things got really really bad. “Dusty was itchy, his skin flaky and he was exhibiting some robotic jerky movements,” said Elizabeth. He was checked over by a vet, put on steroids and Duoxo Calm Spray.

“At the time I did not think much of his ailment, it appeared to be a minor skin thing. I picked up another volunteer in Ohio, and we headed back to Paradise to help close down the rescue project after eight long months of cat rescue,” said Elizabeth. The group effort helped save, reunite, rescue, adopt out or TNR over 1,000 cats. Elizabeth and her friend helped shut down the project, picked up three more rescue cats, then headed to Grand Junction to drop off a blind cat that was going to a new home there.

“Once we dropped off all of the cats and my friend in Ohio, I came to stay at a friends house in Massachusetts and that is where Dusty’s condition started spiraling out of control,” said Elizabeth. “Constant licking would turn into tics and at times full out seizures. His life was a misery of endlessly nodding, biting, licking, contorting. More than once did I think that maybe his quality of life was far too diminished and I should let him go. But his many vets and fans were encouraging, and we kept going.”

Elizabeth was researching, trying new meds, different food combinations, lotions, salves… anything that seemed scientifically valid. He wore a big soft collar and a thundershirt day in and day out. Otherwise he’d tear himself to shreds in mere minutes

Elizabeth’s family is generally nomadic, but currently lives in Rhode Island due to Dusty’s issues and the pandemic. Elizabeth and Dusty share their home with cats Dew and Dammit and Elizabeth’s adult son.

Then, in June of 2019, Dusty was bitten by another flea. “He already exhibited some odd behavior, “said Elizabeth. “Robotic repetitive movements. Periodic excessive licking. Dry, inflamed skin.” Steroids did not help and after a great deal of research she surmised that he now had Feline Hyperesthesia Syndrome. After consulting with a vet at UC Davis and a visit to Tufts where his dermatitis (caused by a severe flea allergy) and food allergies were considered as suspect in his condition, he was put on a series of meds and a hydrolized protein food. “The meds helped a bit but Dusty’s tics, tremors, fur pulling, excessive grooming and other neurological tics were increasingly bad,” said Elizabeth.

After numerous vet visits, including their local vet, Tufts, Ethos and consulting with others that have dealt with cats with FHS, we finally found a medication and food combination that appeared to help a great deal. In addition to his special diet and multiple medications (Prozac, Keppra, Gabapentin,) CBD oil, and Bravecto to avoid fleas, Dusty only has limited contact with other animals. He spends an hour a day in a quiet, dark room to reduce stress licking, and he wears a neck pillow or thundershirt to help decrease the obsessive licking which became a  habit even once the seizures that originally caused the behavior abated.

That’s when Assisi Loop came along.

“We received a donated Loop, and although I was dubious of its capabilities, I gave it a try,” said Elizabeth. “And immediately, Dusty seemed better. It seems to relax him a bit, but it also does appear to help alleviate the remnants of his seizures that were still present in his everyday life.”

“I cannot say for sure it was the Loop,” she adds. “It could have been a combination of things. But I am convinced the loop is helping. When I neglected his regular Loop treatments for a couple of days, the tics seemed to increase in severity. So our routine is to try to get at least a 15 minute session in, three times a day.”

Elizabeth usually only offers  the Loop to Dusty when he is already napping. She just places it over his head and under his legs, or just lays it on him while he rests. He usually remains in place for the duration. She noticed improvements immediately. “I’d say by day four of treatments, I was utterly convinced it was helping.”

To stay up to date on Dusty and his campaign to raise awareness and support for cats affected by the wild fires and by feline hyperesthesia syndrome, please follow him on Instagram.

How the Assisi Loop Works

The Assisi Loop, created by Assisi Animal Health, is a non-pharmaceutical, non-invasive device provides targeted pulsed electromagnetic field therapy (tPEMF™). tPEMF, which was first studied in the 1970s and is FDA-cleared for use in humans, uses low-level pulses of electromagnetic energy to stimulate the body’s own healing mechanisms to help relieve pain and swelling. This therapy can benefits cats with pain associated with arthritis, pancreatitis, wounds, or post-surgical swelling as well as many inflammatory conditions. The Loop is well tolerated by most cats. In fact, many cats really enjoy receiving Loop treatments. Because the Loop stimulates the body’s own healing process, rather than introducing a new substance (like a medication), even a sensitive cat body can handle it easily.

Featuring the same pain control of the Loop via targeted pulsed electromagnetic field therapy (tPEMF™,) the Loop Lounge™ is the only therapeutic pet bed backed by scientific research. Click here to read more about the Assisi Loop Lounge.

*FTC Disclosure: This is a sponsored post, which means that I was compensated to feature this content. Regardless of payment received, you will only see products or services featured on this site that I believe are of interest to our readers.

How to Brush Your Dog’s Teeth – VetVid Dog Care Video
These Dogs Are So Funny, You Won’t Be Able to Stop Laughing| Pets Town
Furry Pet Hospital – Funny Pet care games And Treat Cute Animals
😇 If You Laugh, You Will Lose – Funniest Cats Expression Video 😇 – Funny Cats Life
Cat Walking Around Lost, Finds Kind Person to Let Her In, So Her Kittens Can Have Better Life