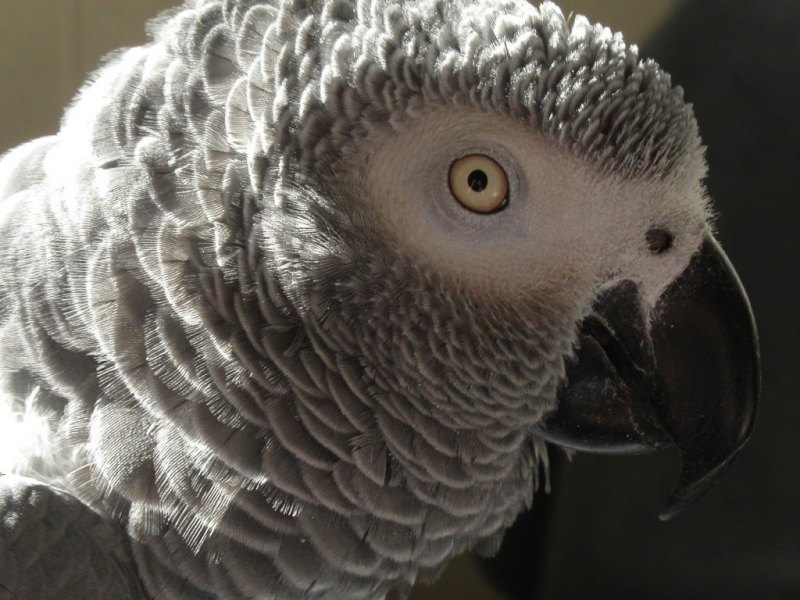 I’ve been asked if we are able to continue our work since we left Harvard, and the answer is yes—although not quite the way we would like, particularly when it comes to training. As readers of this blog and my research papers know, any study in our laboratory that requires training involves our model/rival technique—use of two humans who demonstrate to the parrots exactly what we would like them to learn. Unfortunately, with the social distancing requirements of COVID, we can’t have more than one person working with the birds at any one time.

So, how do we cope? We’ve tried a few different things. At first, we tried Skyping with a former student—that didn’t work very well, because the birds didn’t view her as a real entity. Next, because we had begun to have some success using Alex as a model for Griffin just before Alex passed away, we thought maybe we could get Griffin to model for Athena. That initially didn’t work too well, either, because Griffin was totally bored with identifying toys that he no longer cared about receiving. We have, however, had a bit more success with having Griffin model color labels, which Athena was learning just before the shutdown—but with some interesting twists!

I quickly learned that Griffin wouldn’t simply model color labels of the various objects in the lab for the same reason that he wouldn’t model their object labels…boredom. I also learned that he wouldn’t work with me on a task involving the concept of relative size—beginning by learning to label the color of the bigger or smaller plastic cup—something he was also starting to do with some level of accuracy before the shutdown, something on which Alex had succeeded (Pepperberg & Brezinsky, 1991) and an important concept that we used for subsequent studies (e.g., Pepperberg et al., 2008).

However, when cleaning out the lab at Harvard, I found some index cards with thick lines of different colors and lengths drawn across them—stimuli we had used for training Alex many years before. I wondered if a change in stimuli might intrigue Griffin and whether Athena might learn something by watching—or at least be entertained enough so that she wouldn’t shriek at the top of her lungs, her basic response when she noticed that Griffin was getting attention and she wasn’t. So, I set the birds up on their T-stands close to my chair, as they had been placed for previous unsuccessful modeling attempts, and asked Griffin to look at a card and tell me the color of the longer line.

I knew from experience that if he wasn’t sure what to say but knew he had to produce a color label, he would choose “yellow” by default; I therefore rigged the questions so that “yellow” would be the first correct answer, figuring if he got it right and could ask for a reward, he might pay some attention to the subsequent questions. That part at least worked, and Athena thankfully quietly paid attention—particularly to the transfer of the nut!

The next query was “What color smaller?” and the answer was “Blue.” I showed Griffin the card, asked him the question, and before he could say anything, Athena hollered “ooooo”—it wasn’t “blue,” but it was pretty close to her label at the time (the /b/ sound is not easy to produce for a creature that lacks lips, and she still hasn’t figured out how to use her esophagus to “burp” her /b/ and /p/). I quickly told her she was a good girl and gave her a nut. Griffin was not pleased! After all, he knew the game and knew that he was supposed to be modeling for her, and getting all the nuts.

For the third question, again “What color smaller?”, the answer was “Orange,” and Griffin quickly croaked out “rose”—given that parrots see in the UV, and that I really had no idea what the computer-generated color looked like for Griffin, I told him he was close and to try again. From previous work in the lab, he knew from my response that whatever color it was that he actually saw on the red/orange spectrum, he was to label this particular shade “orange,” and so he did. At this point, I was pretty excited. Possibly this version of the model/rival procedure would actually work with the two birds.

Well, by this time maybe they were bored or had had enough of each other, because neither would respond to my next question, for which the answer was “Green,” but I haven’t given up hope…I’ll keep trying! Once Griffin understands the concept of bigger/smaller, and to say, “None” when nothing is bigger or smaller, there are a number of optical illusions we can study in order to understand just how he sees our world; thus getting him to succeed on this task is really important. And, of course, we are working on a few other studies for which the birds already have the necessary training, and for which testing can be done with one person as long as every trial is videotaped and examined by an independent observer. So, while I have to say that it is not fun trying to adapt our studies to a COVID environment, and that we—as well as everyone else, of course—are looking forward to a return to pre-COVID normalcy, for now, adaptation is key!

Welcome to Barcroft Animals!
Ancient big trees, endangered birds, wildlife, and ecosystems to be sacrificed for ring road
Blind Dog Gets SO Excited After Finding Ball!
Krunch Says Goodbye To Villalobos After Over 7 Years! | Pit Bulls & Parolees
Blippi Cares For Pets At The Animal Shelter! | Fun and Educational Videos for Kids