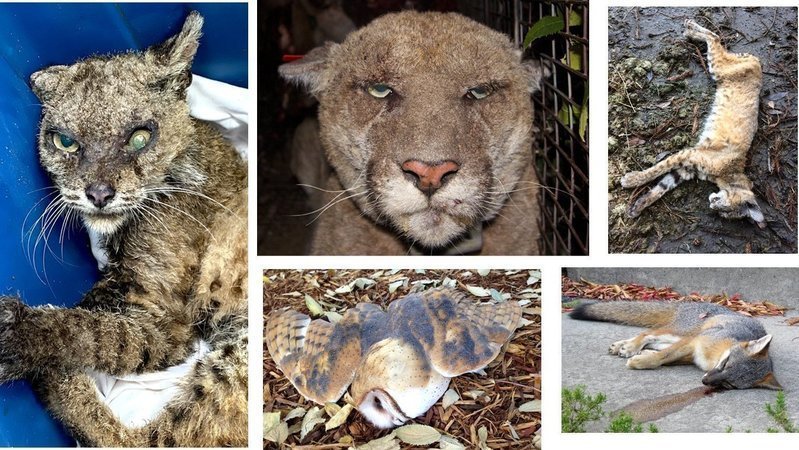 There is an urgent need to protect California’s wildlife. More and more wild animals are being found contaminated by first and second generation anticoagulant rodenticides.

Like the Covid-19 statistics, we are seeing increased numbers of contaminated wildlife because more tests are being performed. However, also like the pandemic, we don’t truly know the extent of exposure because not enough tests have been conducted.

An accurate assessment of the impact on wildlife populations by anticoagulant rodenticides is impossible given the limited data, which is why there must be more research, and a moratorium on the use of products containing these poisons while the dangers are being reevaluated.

The federal Endangered Species Act (ESA) requires federal agencies like the US Environmental Protection Agency (USEPA) to ensure any action they authorize will not threaten the existence of endangered species.

The USEPA has already admitted continued use of rodenticides containing anticoagulants are likely to adversely affect several of California’s endangered species!

The California Food and Agricultural Code §12824 orders the Director of the Department of Pesticide Regulation (DPR) to eliminate from use any pesticide that endangers the environment.

The Federal Insecticide, Fungicide, and Rodenticide Act (FIFRA) requires evidence that a pesticide will not cause unreasonable risk to the environment before it can be registered.

This evidence does not exist!

Cause for revocation of Federal Law

Due to an egregious speculation by the US Environmental Protection Agency (USEPA), certain studies on the secondary risk of anticoagulant rodenticides on non-target wildlife have never been conducted.

In its 1998 assessment of the ecological toxicity of brodifacoum, bromadiolone, diphacinone and chlorophacinone, the USEPA presumed there would be little risk to non-target wildlife where poison is placed “inside and along the outside walls of buildings” or “in vehicles or sewers,” approving such use without requiring secondary poisoning studies or reviewing prior research or literature.

Lack of such crucial data should be enough to at least suspend registration of these poisons.

Furthermore, the EPA referred to a 1993 cursory survey by the US Fish and Wildlife on the potential risk of endangered species, which indicated a “No” risk to the endangered San Joaquin kit fox.

In the 1990s, The California Department of Fish and Wildlife Pesticides Investigation Unit conducted tests on 74 randomly-collected wild birds and mammals representing 21 different species. Over 72% of the predatory birds and mammals were contaminated with anticoagulant rodenticides.

Things have only gotten worse. In 2002, researchers began noticing a decline in bobcat populations in 7 counties in California. They were dying from a typically benign disease. 100% of the sick bobcats (19) tested positive for exposure to anticoagulant rodenticides.

In 2010, a study conducted by researchers through the University of California revealed 90% of the raptors tested positive for exposure to anticoagulant rodenticides.

In 2012, the California Department of Fish and Wildlife reported 100% of the 14 mountain lions tested had been exposed to anticoagulant rodenticides.

In 2015, researchers reported widespread exposure in the endangered California fisher, with residues of the poisons found in 85% of 101 animals.

In 2018, a study of randomly collected black bears in California, 83% were contaminated with anticoagulant rodenticides

In 2019, screening of 19 randomly-collected bobcats revealed 95% had been exposed to anticoagulant rodenticides.

In May, 2020, two adult bobcats were found a day apart and only 7.5 miles apart in Santa Cruz County. Both tested positive for anticoagulant rodenticides.

One was found on the UC Santa Cruz Campus, yards away from the Rachel Carson College, which could not have been more appropriate in calling attention to these insidious poisons and their similarities to dichloro-diphenyl-trichloro-ethane (DDT).

Like DDT, anticoagulant rodenticides have been herald as “wonder poisons”, but, also like DDT, these poisons are entering the food chain and having devastating impacts on wildlife populations and ecosystems.

Like DDT, anticoagulant rodenticides have long hepatic half-lives ranging from over 3 months to nearly a year, allowing them to bioaccumulate and magnify through the food chain.

Like DDT, anticoagulant rodenticides can have “sub-noticeable” effects. Animals may appear healthy while carrying a sub-lethal load of anticoagulants in their system.

For example, the life expectancy of bobcats with ongoing exposure to anticoagulants drops from 5 years to under 2.

Exposure to anticoagulants can cause an animal to lose an entire litter of offspring, having an impact on that population.

Alarmingly, anticoagulant rodenticides are not just being found in scavengers and predator species but in invertebrates – snails and slugs, crickets, freshwater fish, seed-eating birds, lagomorphs and ungulates, causing some scientists to call for more screenings of game species.

Currently, the CDFW Wildlife Investigations Lab (WIL) has a limited budget for wildlife necropsies and toxicology tests. There have been a number of times where requests to test animals suspected of being contaminated with anticoagulants were refused by WIL due to lack of funds, leaving it up to non-government entities – often non-profit wildlife rescue organizations, to cover the costs. At about $165.00 per screening, the costs can be prohibitive.

As stated earlier, the true extent of contamination of non-target wildlife and ecosystems is not known. There is a need for random sampling of various species of animals throughout California to better understand the impact these poisons are having on our wildlife. These studies should be overseen by persons not affiliated with the pest control industry or Department of Pesticide Regulation.

The Department of Pesticide Regulation contracts with the Department of Fish and Wildlife for a “Pesticide Effects Coordinator” liaison to, among other things, assist in the reevaluation of pesticides. The contracts I’ve seen are for 60% of the CDFW employee’s salary plus benefits.

The liaison position has routinely been filled by the same person who manages the State’s Wildlife Investigations Lab, responsible for performing necropsies and toxicology screenings.

It doesn’t seem right that an employee of a trustee agency, tasked with protecting wildlife and the environment, should be receiving any portion of their salary from a Department that is funded almost entirely by sales and licensing of pesticides, which, by definition, are products designed to kill organisms.

It’s especially concerning when the autonomy of the liaison appears compromised.

One of the conditions specified in the contract between DPR and CDFW stipulates DPR will be given an opportunity to review (and approve) any presentations created by the liaison for delivery to professional pest control operators.

The level of control DPR wishes to have over the liaison’s work is made very clear in this statement from DPR to the CDFW liaison in a 2018 correspondence:

Excessive and unnecessary use of rodenticides

I have been in the “pest” control business for nearly eleven years. My company provides exclusionary repairs (blocking rodent entry points) to successfully resolve rodent infestations in and around structures without the use of rodenticides.

Exclusion is the most effective method of resolving rat and mouse infestations long term.

Imagine a boat taking on water through a few small holes. It doesn’t do any good to bail the water until you plug the holes. The same thing applies to rodent intrusion.

Using poison without exclusion is pointless, as is the continued use of poison after exclusionary repairs. However, pest control companies benefit from the repeat business from using poisons. The pest control industry is also pro-poison.

While exclusion is by far the best way to solve a rat or mouse infestation, the number of companies offering exclusion is low compared to the number of businesses that apply poison, likely the result of efforts by the industry to squelch ideas and methods that threaten to reduce use of rodenticides.

Some consider the DPR a captive regulatory agency, acting in ways that benefit the industry rather than public interest and safety, but it appears the pest control industry is also captured – headed by trade associations with a pro-poison agenda, using lobbyists and political contributions to promote rodenticide use and thwart any efforts to reduce use of poison.

It’s really unfortunate pest control operators are being misguided. It seems the majority of conference workshops and trainings, intended to provide licensed pest control operators with good, solid and sound information, are funded by chemical companies, pesticide distributors, or organized by individuals they sponsor. The information delivered is skewed toward rodenticide use.

Even the Structural Pest Control Board appears to have incestuous ties to poison advocates.

A call to action

In a June 16th letter, Wildlife Emergency Services, requested Governor Newsom, Secretary Crowfoot and Secretary Blumenfeld to protect California’s one-of-a-kind community of plants and animals by supporting an immediate moratorium on the use of products containing brodifacoum, bromadiolone, difethialone, difenacoum, diphacinone and chlorophacinone, while the USEPA conducts a reevaluation of their ecological impacts.

WES further requested of the Department of Pesticide Regulation that it take immediate action in accordance with the California Food & Agricultural Code 12824, 12825 subsections (a), (b), (c) and (g) and 12825.5, and, Title 3 of the California Code of Regulations, Division 6 Sections, 6220.

In addition, pursuant to California Food & Agricultural Code §12826, it was requested of Val Dolcini, Director of DPR, that he initiate the process of suspending the registrations of brodifacoum, bromadiolone, difethialone, difenacoum, diphacinone and chlorophacinone including timely filing of any required accusations.

If, by December 31, 2020, the registrations of these six anticoagulants have not been suspended or canceled, registrants may be required to submit accurate and complete renewal applications in compliance with California Food & Agricultural Code §12817 and §12824.

Pursuant to the Federal Insecticide, Fungicide, and Rodenticide Act (FIFRA), it was requested of the US Environmental Protection Agency and CalEPA that they suspend use of products containing brodifacoum, bromadiolone, difethialone, difenacoum, diphacinone and chlorophacinone while conducting the ecological risk assessment.

The reevaluation should include new studies to account for the missing data noted by the US EPA’s 2004 Ecological Risk Assessment, specifically, conclusive evidence on the sub-lethal effects on reproduction, data on acute, chronic and secondary toxicity, bioaccumulation and rates or retention, and data on the various non-target species that frequent baited areas.

In reevaluation of these chemicals, while it is important to know toxicity thresholds, we must consider the overall widespread contamination of California’s wildlife and ecosystems.

A silent and hidden ecological disaster

If wild species were being contaminated by a spilled substance – like an oil spill, there would be an organized response by government agencies and the responsible party would be held accountable.

The widespread contamination of our State’s wildlife by anticoagulants is different in that the injuries are below the skin, in the blood and in the liver, but the ecological damage is comparable and State and Federal agencies must respond to this growing environmental catastrophe similarly.

To reduce exposure of non-target wildlife, an immediate moratorium is imperative.

“If we knew as much about DDT in 1945 as we know now, it probably would not have been registered,” – Dr TC Black, Michigan Dept of Natural Resources

Please sign the petition asking the US EPA and California leaders to support an immediate moratorium on use of these poisons.

This petition was first published by by Rebecca Dmytryk in June 2020.

What you can also do