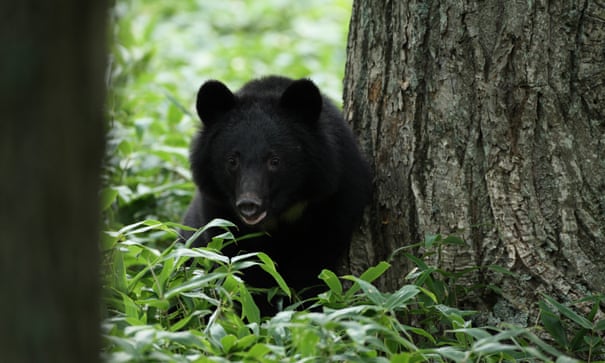 A spate of bear attacks in Japan has prompted calls to improve their natural habitat, as experts warned of more potentially dangerous encounters with the animals as they venture into populated areas in search of food.

Japanese media have reported several incidents of “ursine terror” in recent weeks, including an attack in Ishikawa prefecture last weekend that left four people injured, including a man in his 90s and two hunters called to confront the bear.

The bear, which weighed more than 100kg (220lb), had punctured the tyre of a police car with its claws and was shot dead after entering a home. This week another black bear that wandered into a shopping mall in Ishikawa was killed after a 13-hour search.

The attacks are being attributed to a shortage of acorns in the bears’ natural habitat, forcing them to wander into populated areas in search of food. Black bears, which can grow up to 1.5m (5ft) in height and weigh more than 100kg, eat the highly calorific and nutritious nuts to fatten up before they begin hibernating in November.

“There is less to eat in the mountains and that is why they are coming down into villages,” said Yuko Murotani, president of the Japan Bear and Forest Society.

Rural depopulation and the resulting abandonment of farmland is also a factor, as it has blurred the once-distinct borders between forests and villages.

Conservationists have warned that encounters between bears and humans – a traumatic experience for both parties – will continue unless more is done to ensure an adequate supply of acorns and other foods to sustain them in the summer and early autumn.

The rise in the number of attacks in recent years has left officials struggling to strike a balance between protecting Japan’s dwindling bear population and keeping the public safe. Possible solutions include establishing safe feeding spaces to prevent bears from venturing into populated areas or leaving supplies of acorns on higher ground.

“If they can’t find enough acorns in the mountains, they will inevitably search for them in places where there are people,” said Murotani, who is alarmed by the growing perception of the bear as an inherently dangerous animal.

“We used to coexist with bears and haven’t always hunted them,” she said. “They are not naturally inclined to attack humans, but attacks like those that happened recently strengthen the belief that they have to be hunted and killed.”

Excessive hunting, in some cases to extract bile from the animal’s gall bladder for use in traditional Chinese medicine, coupled with the degradation of their forest habitat has hit Japan’s bear population, which comprises Ussuri brown bears on Hokkaido, the northernmost of Japan’s four main islands, and smaller Asian black bears on the biggest island, Honshu. Black bears are thought to have disappeared from Kyushu island in the early 1990s, and only about two dozen are thought to be left on nearby Shikoku island.

A 1991 study by the environment ministry estimated the overall number at between 8,400 and 12,600, but conservationists believe it is between 15,000 and 20,000. The International Union of the Conservation of Nature’s Red List of endangered species classes the Asiatic black bear as “vulnerable”.

In Ishikawa, located on the Japan Sea coast, authorities recently raised their bear alert to the highest level for the first time in 10 years following a number of sightings. “It’s scary. I didn’t think we would see any bears here as we are a long way from the mountains,” a local woman told the Kyodo news agency.

The attacks have revived memories of Japan’s deadliest bear attacks, known collectively as the Sankebetsu incident, in which an 8.85ft brown bear weighing 749lb killed seven villagers and injured three others on Hokkaido in 1915. The bear, whose rampage inspired novels, radio and stage productions, and a film, was tracked down and shot dead by a hunter.

Thunderstorm Phobia: What It Is and How to Treat It
😇 If You Laugh, You Will Lose – Funniest Cats Expression Video 😇 – Funny Cats Life
Halo The Seal May Be Pregnant | The Aquarium: A Deeper Dive
Adele – Rolling in the Deep – Pawdele – Digging in the Deep – Petody Karaoke
Abandoned Puppy With Mange Transforms Into A Beautifully Healthy And Happy Girl | The Dodo