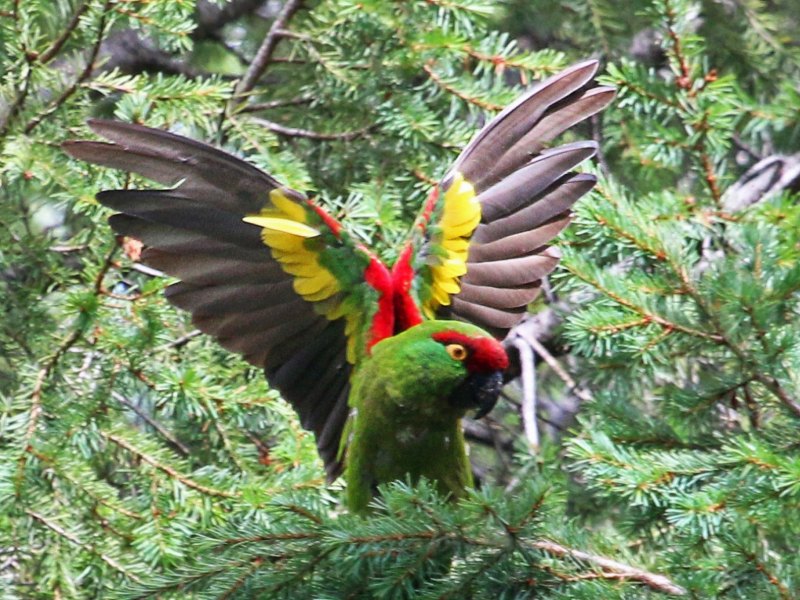 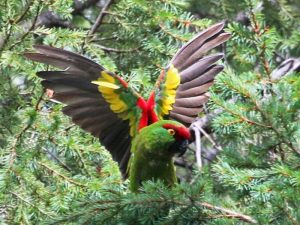 The thick-billed parrot is a beautiful bright green and red-crowned parrot weighing in at approximately a pound. It is also a bird that is on the IUCN list as “threatened.” To date, there are only about 1,700 in the wild. Currently, the bird is found in the northern regions of Mexico. It is one of a few exotic birds once native to the U.S. For the record, the last official sighting of the thick-billed parrot in the U.S., before it moved on, was in 1938 in the Chiricahua Mountains, which is in southeastern Arizona, close to the border of New Mexico. The mountain range sits largely within the Chiricahua Wilderness, reaching a height of 9,759 feet at its highest point. But since then, the parrots have settled in Mexico.

Parrots That Thrive in Elevation

These birds like high elevations, making the mountain range one of comfort for them. There, they existed on a foraged diet of pinecone seeds. In the mountain range, there are rich sources of food for the parrot. However, illegal hunting was largely at fault for the disappearance, or local extinction, of the parrot. For nearly a 100 years, the skies of Arizona has been void of their loud vocalizing.

Presently, a devoted and dedicated collective of savvy scientists, and ornithologists are working diligently to help restore many parrots to their once natural habitats. The same is true of researchers and scientists attempting to reintroduce the thick-billed parrot back into its original mountain habitat of Arizona. The hope of restoration is two-fold. The first–and always is–conservation. What was once a dangerous locale for the birds is now under protection. It is hoped that new protections can help stem the frightening extinction rates seen in the world of our precious creatures who have fallen prey to man’s development of essential habitat spaces.

Another Try in Arizona

In the ’80s and ’90s, the reintroduction of the thick-billed parrot into the wilderness of the Arizona landmass with its mountain proved unsuccessful. Captive-bred, the birds easily fell prey to natural predators and, therefore, reduced the released birds back to local extinction. But the time is once again here for another attempt to reintroduce the parrot back into Arizona.

Since 2005, the Arizona Game and Fish department has worked with counterparts in Mexico to help restore the birds back to the mountain range. One of the problems for the remaining birds in Mexico is that warmer temperatures are reducing the snow-lines. This wreaks havoc on the pinecone seed diet the birds depend on to survive. With the Arizona mountain still rich with the necessary temperatures, and seed availability it only makes sense to continue to work hard to make the U.S .home again to the birds.

With proper maintenance and continued learning, the Game and Fish department might finally succeed in restoring a suitable and safe habitat for a parrot that desperately needs it. Let us hope that this time is the time it works and works well for the beautiful parrot who once called the U.S. home.