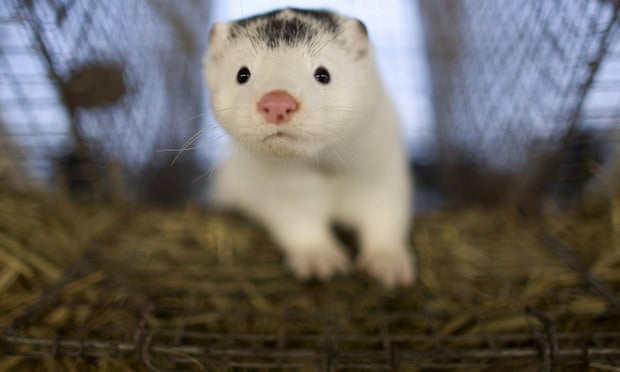 More than 17 million mink are being culled and dumped in mass graves in Denmark in a desperate bid to eradicate a mutated strain of coronavirus that could make vaccines less potent.

Mr Hancock told the House of Commons today the UK had acted ‘quickly and decisively’ by banning non-British citizens returning from Denmark and introducing strict quarantine rules for any Brit who’d recently returned from the country.

The emergence of Cluster 5 caused global panic because it appears to have some resistance to disease-fighting antibodies, substances produced by the immune system to fight off invaders. Most Covid-19 vaccines work by stimulating an antibody response.


Danish officials are trying to stomp it out before it spreads in the general public, though so far it is only known to have infected 13 people in the north of the country.

The Danish environmental and health authorities announced the animals were being buried on military land near the northwestern town of Holstebro because there are not enough incinerators to burn all of the corpses.

Denmark’s plan to cull 17 million mink in the country is facing obstacles, however, after the government admitted it did not have legal basis for the order. At least 2million mink have already been killed.

Scientists believe the mutant virus jumped from fur farm workers to mink in the summer before it was passed back to humans. As it crossed between species, a mutation occurred on its ‘spike’ protein, which it uses to enter human cells.

It’s significant because the leading vaccine candidates — including Pfizer’s jab, which was yesterday revealed to be 90 per cent effective — work by targeting this protein. Although there is no proof yet the strain can hamper vaccines’ effectiveness, the location of the mutation means it is theoretically possible.

Mr Hancock said today: ‘On Thursday evening last I was alerted to a significant development in Denmark of a new evidence that the virus had spread back from mink to humans in a variant form that did not fully respond to Covid-19 antibodies.

‘Although the chance of this variant becoming widespread is low, the consequences should that happen would be grave, so working with the Home Secretary and the Transport Secretary, and all the devolved administrations, we removed the travel corridor for travel from Denmark in the early hours of Friday morning.’

Mr Hancock added: ‘On Saturday and over the weekend following further clinical analysis, we introduced a full ban on all international travel from Denmark.

‘British nationals or residents who are returning from Denmark whether directly or indirectly can still travel here but must fully self-isolate along with all other members of their household until two weeks since they were in Denmark.

‘I know these are serious steps and I understand the consequences for people, but I think the whole House will understand why we had to act so quickly and decisively. Be in no doubt, we will do what needs to be done to protect this country.’

Farmers living in regions of Denmark not affected by the mutated strain of Covid-19 are still allowed to sell mink fur — but must still kill all their livestock by the end of this week.

UK guidance published yesterday means anyone admitted to hospital who has recently returned from Denmark will be treated in ‘strict’ quarantine.

It also says people who test positive for Covid-19 within a fortnight of arriving from the Scandinavian nation must be isolated and sent to a specialist infectious diseases centre for further tests.

UK officials fear a new variant of the virus could spark a fresh wave of new cases while the country is already in the midst of a second epidemic.

There is no evidence yet to suggest the new variant is any more infectious or deadly than the coronavirus infecting most people currently. And there are currently no known cases in the UK.

At the weekend non-British travellers coming from Denmark were banned from entering the UK, as health officials try to block the mutated strain from reaching British shores.

Planes and ships from Denmark are now also being denied permission to land or dock in the UK and foreign lorry drivers are to be turned back from the border if they have recently travelled through the country. Brits who have been in Denmark within the past 14 days must also self-isolate with their entire household.

This article was first published by The Mail Online on 10 November 2020. Lead Image: Diego Azubel/EPA.

Just One Bite Could Infect This Cat With FIV | My Cat From Hell
Abandoned Puppy With Mange Transforms Into A Beautifully Healthy And Happy Girl | The Dodo
Watch This Teeny-Tiny Kitten Grow Up And Get A Tiny Kitten Sister Of Her Own | The Dodo
These Dogs Are So Funny, You Won’t Be Able to Stop Laughing| Pets Town
Kitten Who Can’t See, Now Has Another Cat to Help Him Navigate and Learn to Be Brave