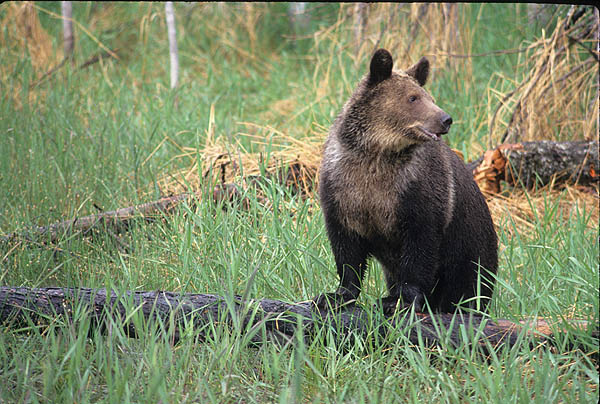 In September, Wyoming Governor Mark Gordon, testifying on behalf of Wyoming Sen. John Barrasso’s latest bill to gut the Endangered Species Act (ESA) peddled the fake-news narrative that the ESA is “broken.” States would do a better job recovering endangered wildlife, Gordon testified, ignoring the obvious reality that every single species protected under the ESA got to the brink of extinction as a result of wildlife management failures by state agencies.

Governor Gordon highlighted the re-listing of Yellowstone grizzly bears as a key example of endangered species protections gone wrong. In May of 2018, while competing in the Republican primary, then-candidate Gordon remarked, “As a lifelong Wyoming sportsman and rancher, I applaud the Wyoming Game and Fish Commissioners for their decision today. A terrific example of why decisions about Wyoming lands and wildlife belong in Wyoming hands. As Governor, I will fight to keep it that way!” Spotting the post, I replied, “How weak. I will look forward to canceling this hunt through an ESA listing by judicial ruling. Because the Yellowstone grizzlies remain isolated from other bear populations, and as such they are still in jeopardy. This hunter and wildlife biologist is standing strong against unscientific wildlife mismanagement.” In the end, both of us made good on our campaign promises.

In reality, the Yellowstone grizzly’s journey through the court system reveals that the Endangered Species Act worked perfectly, protecting an imperiled population from forces bent on threatening its survival.

The U.S. Fish and Wildlife Service delisted the Yellowstone grizzly bear population of the great bear in 2018, and conservation groups and tribes promptly brought suit in Montana challenging the removal of Endangered Species Act protections. These groups (including, in the interests of full disclosure, Western Watersheds Project) argued that the Yellowstone grizzly population remained isolated from other bears, with dwindling natural food supplies, and therefore de-listing was premature.

The State of Wyoming was one of a rogue’s gallery of anti-conservation entities (including the National Rifle Association, the Rocky Mountain Elk Foundation, the Wyoming Farm Bureau, and the Wyoming Stock Growers Association) who intervened in the lawsuit. The states, including Wyoming, argued that state management was preferable, and listing needed to be lifted so states and hunters could kill more bears and create “social tolerance” for grizzly bears in rural communities within grizzly bear habitat.

Two courts – the U.S. District Court of Montana and the Ninth Circuit Court of Appeals – each handed the State of Wyoming a resounding defeat, with rulings steeped in science. The bear went back on the list and under federal ESA protection.

Wyoming is perhaps the most obvious example of how state wildlife management gets hijacked by right-wing politics, for the benefit of commercial industries. For example, Wyoming’s state grizzly bear plan contains a politically gerrymandered line on the map designating a “Demographic Monitoring Area,” or DMA. Lands within this line are managed for grizzly bear recovery, habitats outside this artificial border are managed for grizzly bear extinction. It is notable that many of the lands that were occupied habitat for grizzly bears – including the majority of several entire mountain ranges as well as parts of the Bridger Wilderness – were cut out of the DMA by the state. It turns out that all of these exclusions were areas where ranchers were grazing domestic sheep on public lands, a foolish enterprise in grizzly country. Conservation groups later bought out public land sheep leases in these areas to solve the problem that the livestock industry was causing for grizzly bears and other native wildlife, which is the real way to create social tolerance for bears, but the politically gerrymandered DMA boundaries remain in place.

Wyoming’s wolf management policy provides an even starker example of Wyoming’s disregard for rare wildlife. The U.S. Fish and Wildlife Service unwisely stripped Endangered Species Act protections from wolves in Wyoming in 2017, despite the state’s anti-wolf plan. This plan authorizes trophy hunting for wolves in the wilderness surrounding Yellowstone National Park, but across 85% of the state, the wolf has been classified as a “predatory animal,” and can be killed without limit and without a license, in any season. It’s the exact opposite of wildlife management.

Compounding Wyoming’s absurdly anti-wildlife wolf policy, the state allows a practice called “coyote whacking” (but which also targets wolves), in which snowmobilers runs coyotes or wolves to exhaustion with snowmobiles, then kill the animals by running them over, shooting them, or bashing them to death against their snowmachines. A brave state legislator from Jackson introduced a bill to ban this repugnant practice, but the Wyoming legislature where land ethics and sound wildlife policy go to die, and the bill never even made it out of committee. There’s a disturbing bloodlust and lack of a land ethic in the Wyoming legislature and in its citizenry. A pack of wolves recently made it through the gauntlet of Wyoming’s extinction zone, and made it to the comparative safety of Colorado (where wolves remain protected under the Endangered Species Act until the recent delisting decision). But then several were then killed after wandering back across the border into Wyoming.

The ESA is one of the wisest laws ever to come out of Congress. It was passed by overwhelming bipartisan majorities (92-0 in the Senate, 394-4 in the House of Representatives) and was signed into law by President Nixon, who proclaimed, “Nothing is more priceless and more worthy of preservation than the rich array of animal life with which our country has been blessed.” This law remains overwhelmingly popular with the vast majority of Americans, with 90% of voters supporting the law just the way it is. Conservation and stewardship of native plants and animals are a bedrock American value, and the ESA has proved its worth time after time after time. Indeed, 99% of species that have ever been listed under the ESA have escaped extinction. (In contrast, 15% of species denied protections and relegated to the purgatory of the Candidate Species list went extinct between 1974 and 2004.) Ninety percent of ESA-listed species have met their recovery and delisting deadlines, according to their individual timetables assigned in their Recovery Plans.

With great foresight, the ESA’s framers required that once a species gets to the brink of extinction, conservation and recovery decisions must be based solely on the best available science. Economic considerations and political meddling cannot interfere in decision-making, a key provision because it is economic interests and political bungling (and corruption) that tend to be the root cause of the demise of native plants and animals in the first place. It is necessary to get the agents of extinction out of the way in order to put rare native species on the road to recovery.

Opponents of endangered species conservation constantly call for “reforming” or “modernizing” the ESA, which is Orwellian newspeak for gutting its protections. These protections are part of the real reason that anti-conservation politicians are constantly trying to rewrite the ESA. The oil industry, the livestock lobby, the strip-miners, and the logging industry all see the removal of conservation mandates as necessary steps to get these profit-driven agents of extinction back to the business of killing rare wildlife and destroying its habitat unimpeded. Once a rare species goes extinct, goes their cynical rationale, all those inconvenient conservation protections become unnecessary, and the almighty dollar can once again be the sole determining factor constraining for-profit businesses.

America deserves better. Wildlife is managed under the public trust doctrine, and under the law governments need to steward native wildlife for the benefit of the people, not for the sole convenience of corporate interests. Politicians in Congress should focus on fully funding the ESA and advancing the goals of species recovery rather than trying to undermine the law under the false pretense that states can do better. And the State of Wyoming should keep its mouth shut on the issue until it can prove that it can become a responsible steward for all of its native wildlife.

This article by Erik Molvar was first published by The Wildlife News on 17 November 2020. Erik Molvar is a wildlife biologist and is Executive Director of Western Watersheds Project, a nonprofit environmental conservation group dedicated to protecting and restoring wildlife and watersheds throughout the American West. Lead Image: Photo by George Wuerthner.