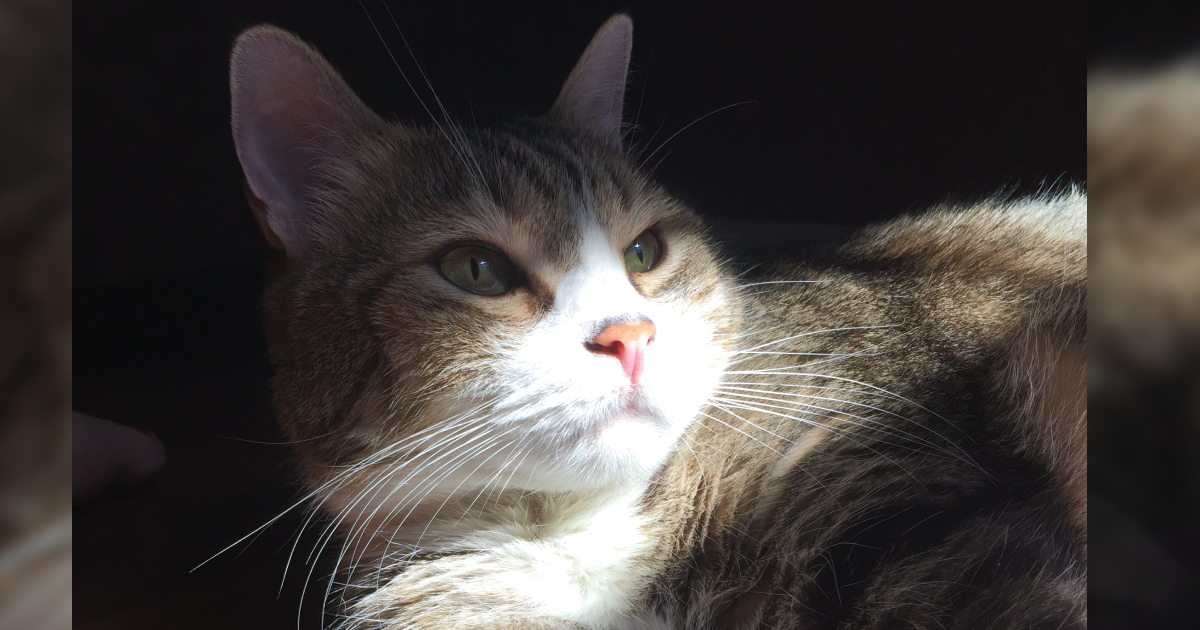 Greetings to our fellow pawsome humans!

We’re bringing you something a little different in this edition of CattyCorner. Cat correspondent Forrest Wisewhiskers’s sage advice has caught the attention of cat lovers everywhere and people want more about this smart tabby boy.

iHeartCats.com assistant editor Adriana Sandoval sat down with Forrest for an exclusive interview. There was much chin-scritching and purring as the pair enjoyed a warm afternoon in Forrest’s favorite spot, his chair on the front porch where the sun hits just right.

Getting to Know Forrest Wisewhiskers AS: You mention having been feral once. How did you come to be the housecat you are today?

FW: When I was about 4 years old, humans started taking care of my feral cat colony. I’d talk with some of the people from afar when they put out food for us. But I kept my distance until I picked up a respiratory infection that hit the colony. I was feeling rough and just didn’t have the energy to run away when a woman walked up right up to me. My eyes were goopy and runny, but I remember the way she blinked at me. Like she was trying show me she was a friend even though we spoke different languages.

That kindness did something to me.

It left me endeared to humans.

Which was good, because the lady took me with her and everything changed. I went to a shelter and then a foster home because the humans said I needed some extra love. Turns out I made an excellent house cat. No surprise there, I am impressive.

After I got better from a neuter surgery (whoa, what a shock) and my infection, I hung out at the shelter some to meet people looking to adopt. My mom and dad found me there and forever home I came. That’s been almost ten years ago now.

AS: What do you remember about the shelter or rescue?

FW: The shelter was the busiest place I’ve ever seen and I lived with wild cats! There were so many other cats and lots of them were worried about being in unfamiliar surroundings. I started talking to them, learning their stories, and picking up the bits of wisdom I now share with my minions.

At the shelter, I also realized how much people can love. No matter what, the staff and volunteers at the shelter did everything they could to keep us kitties as comfortable and happy as they could during our search for homes. 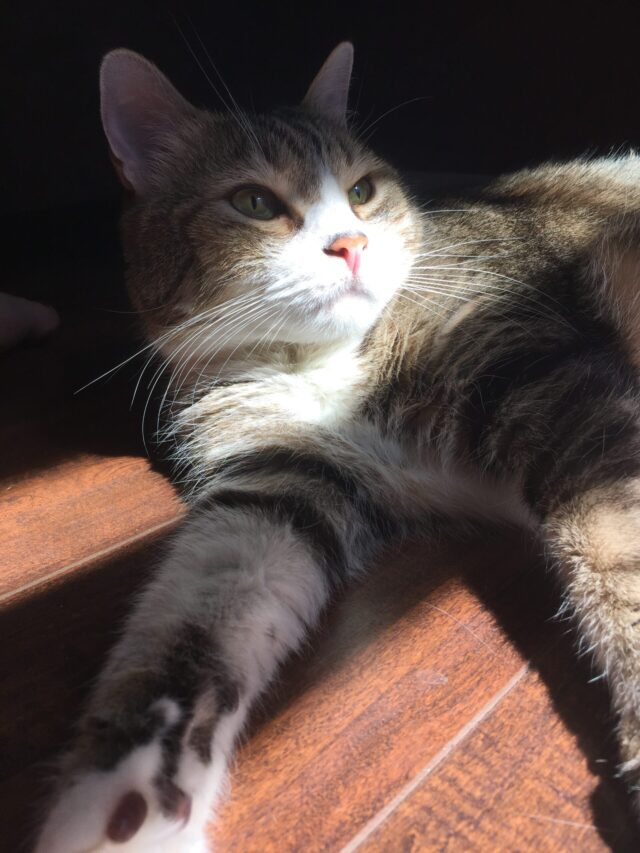 AS: What do you like best about living with humans? Anything you really dislike?

FW: Humans are great. I was kind of an odd cat out in the colony for not minding people. They brought food and kind words. That’s not something many feral cats know anything about. I wish more of my cat cohorts understood most people just want to help them. But, what can I say, cats are spooky by nature.

The only thing trying thing about humans is the neediness. Like dogs, people need lots of attention and that really breaks into napping and eating schedules. I can’t tell you how many times I’m snoozing and mom scoops me up because she says I need a hug. I know the truth, she needs the hug, but whatever she needs to think. Truly, I do enjoy some hugging, it makes me purr. And tickle my furry stripes, humans love hearing a good purr.

AS: Speaking of dogs, what are your thoughts on the canine kind?

FW: Dogs slobber too much and smell funny. They’re too hyper for my taste, but I suppose their goofiness is amusing. From afar though, no dog drool on me, thank you very much. 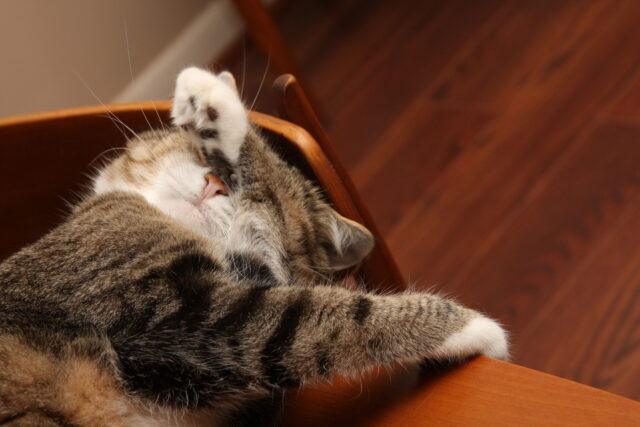 AS: Do you have any words of advice for humans considering adopting a cat?

FW: Getting a cat always seems like the best idea and, while it is, first consider your home and lifestyle. People say cats are far more independent than dogs and do fine when left to their own devices. But cats need more attention and love than most people realize. Don’t adopt a cat just to leave him alone in your house all the time.

Also, most folks want to get a kitten, but I just want to remind folks, don’t forget to consider adult and senior cats. They often go overlooked in shelters because kittens are fluffy and irresistible. Maybe you could adopt a kitten and a senior!

I’d also like to throw an idea out there when it comes to the baby floofs. If you decide you need kitten shenanigans in your life, maybe think about adopting two if you have no other cats at home. 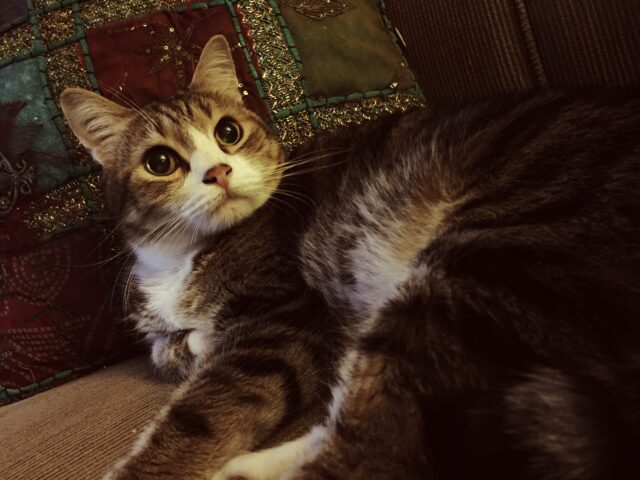 AS: You’ve discussed common cat quirks in the past – what would you say is your weirdest quirk, and why do you do it?

FW: I love potato chips. Their salty deliciousness just can’t be beat. First, I enjoy licking off the salt and then I’ll crunch it up before it gets too soggy under my tongue. Mom is picky though. She only gives me plain chips because she says some seasonings can make cats sick. And, she’ll only give me one at a time, which I think is silly but she says too much fat isn’t good for me. She’s right, but I don’t tell her I said so because I want more chips. I love salt, it reminds me of tasty ocean fish… FW: Oh, yes. Simple pleasures are what make the world go round. A full bowl of food, snuggly blankets, both great. But my favorite pleasure is napping in a puddle of afternoon sunshine. 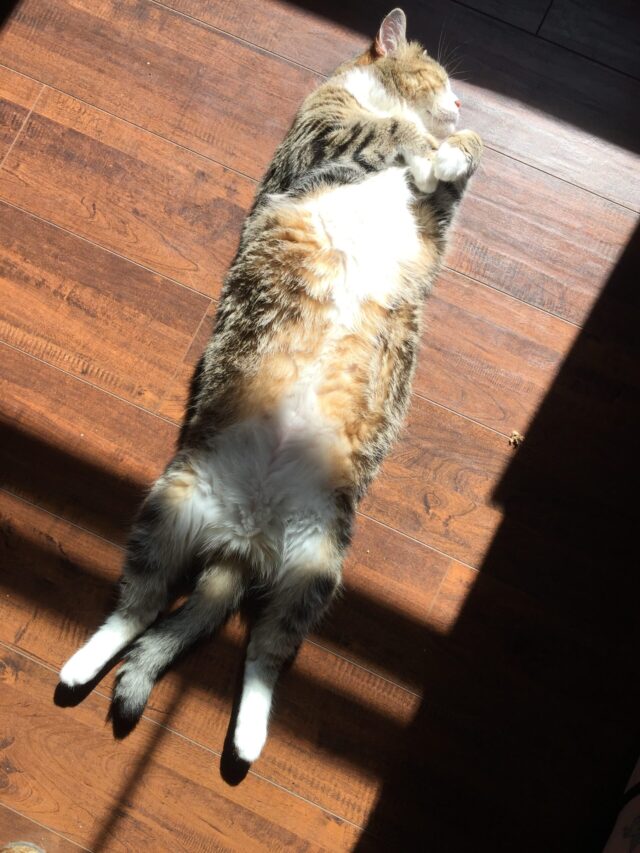 AS: We’d like to ask you to weigh in on a very divisive topic, as we respect your opinions – wet food or dry food?

FW: My opinion? Why choose? If it’s made for the eating, it should be eaten. Some cats refuse one or the other, but they’re only doing themselves a disservice. Wet food and dry food both make a cat belly full, healthy, and happy! Think about it like this: Would you only eat the fries and not the burger?

Plus, only eating dry food, like only eating fries, can lead a cat to obesity as dry food has lots of carbs. As protein monsters, a diet of only carby dry food can make us chubby. Wet food helps keep us lean. With this in mind, here’s my purrferred method of dining…

A serving of wet food upon my morning rise, then a few bites of kibble here and there throughout the day, capped with a dollop more of wet food in the evening. Snacks and treats are served as well. But, every cat body has its own dietary preferences. Feed your cat according to their needs and tastes, but do your best to include some wet food. Kitties will certainly let you know if you’re not feeding to their liking.

AS: How do you think the world might be different if cats were in charge?

FW: What do you mean ‘if’ cats were in charge? Felines have run the world from behind the scenes since we first padded the Earth. Cat lovers have certainly realized this, but kitties are just waiting on the furless minions to spread the word. From the state of social media, it looks as if the message of feline world domination is spreading. Just know when the entirety of the world has learned the truth, there will be mousies and overflowing food bowls for all who take the knee and swear their feline allegiance. 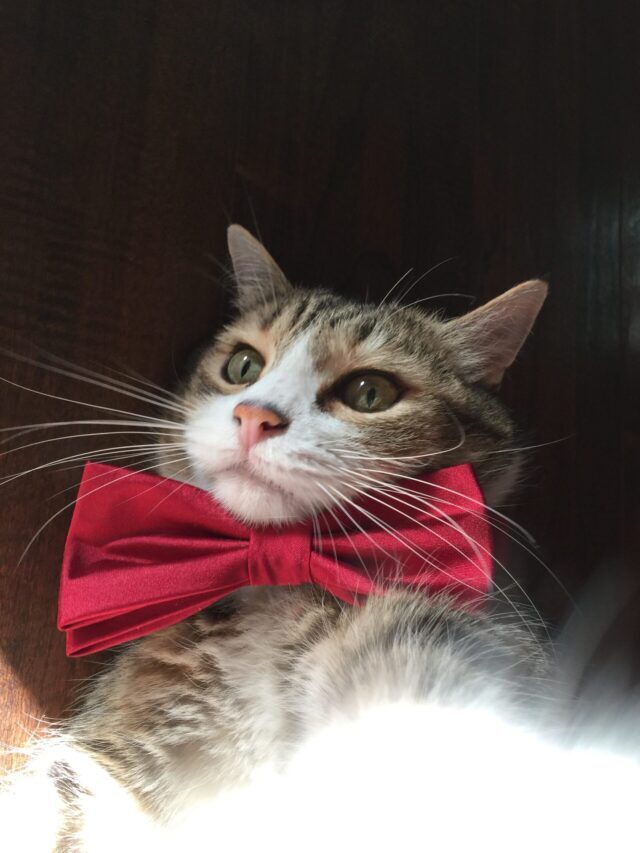 And there you have it, a glimpse into the mind of the wisest whiskers around! Keep reading CattyCorner to learn more about your feline through the advice and opinions of a cat. Who better to ask?!?

Forrest insisted we include his all-important reminder to cat parents, so…

Don’t forget to feed the cat!