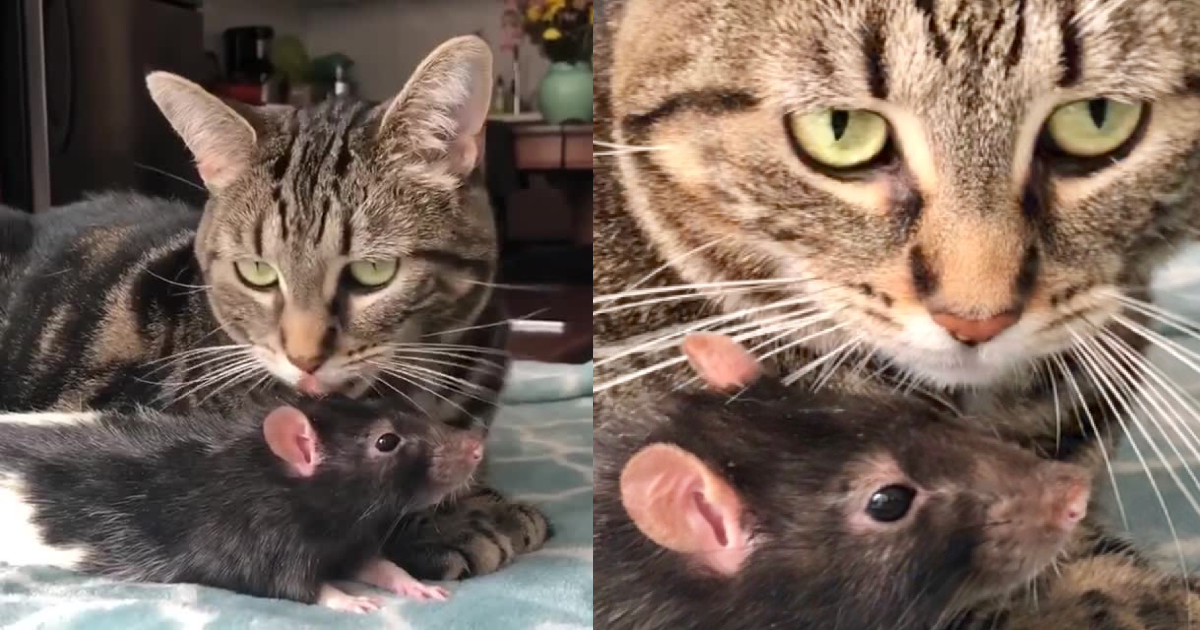 Love knows no bounds and when two hearts connect it doesn’t matter if you’re a cat and a rat. When the love is that strong, that’s all that matters.

Galaxy is a fine tabby cat lady who loves her mom and her human sister.

Bernie is a fancy rat who shares the same family, with both mom and sister wrapped around his long tail.

But together, they make the best of friends. 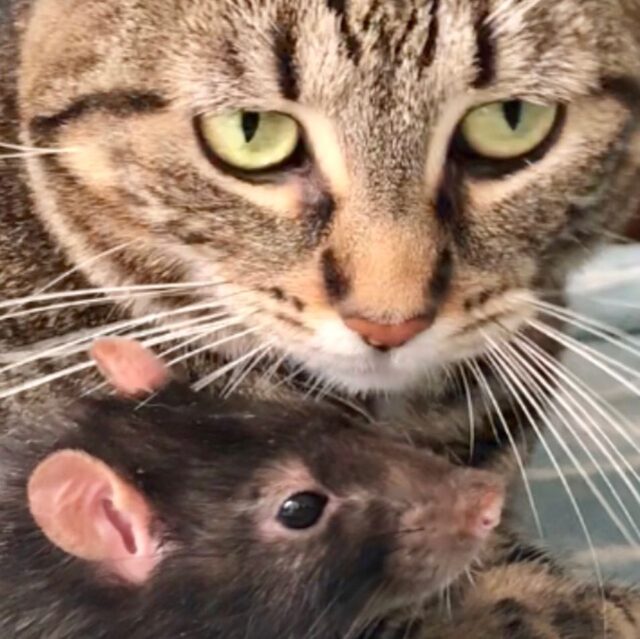 And the feeling is mutual from Galaxy.

Anywhere Galaxy goes, Bernie is sure to be close, usually standing beneath his big, stripey friend! But how did a cat and a rat become such close buddies?

Cat and Rat BFFs From the Start

When Bernie first came home, his mom and big sister kept a close eye on him as Galaxy the cat might think him a fine snack. But the humans were in for the greatest of surprises. Their big sister joked, “Galaxy wanted a friend more than she wanted a snack.” 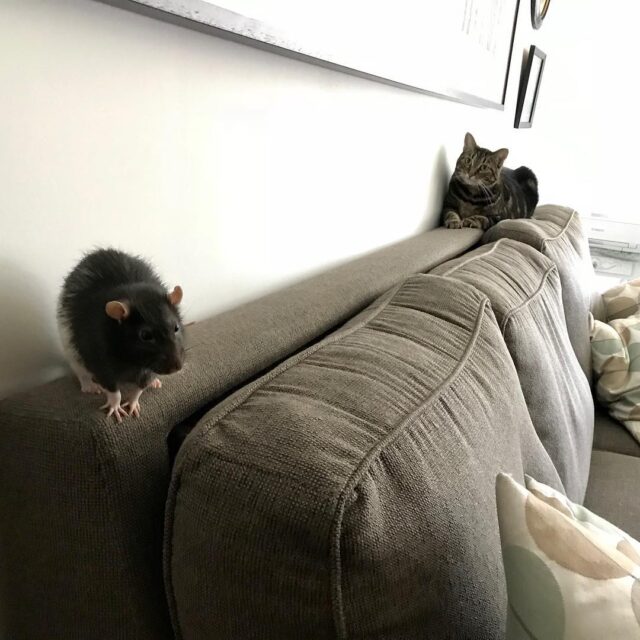 Within a couple of weeks, the pair were quite curious about each other and with their humans paving the way, they got to know each other. Soon, it was nonstop playtime. Galaxy and Bernie loved to roughhouse, but everybody stayed pretty good about keeping teeth and claws to themselves!

A good game of chase quickly became another fun activity for the pair. And to keep it interesting, cat and rat often switched up who chased who. Bet you never thought you’d see a rat chase a cat!

After playtime, the pair often curled up together for a good grooming session. Galaxy would lick Bernie clean while the sophisticated rat kept the tabby’s ears nice and tidy. Their big sister explained Galaxy’s maternal instincts and Bernie’s young age helped the pair form a purrfect bond which made their family so happy.

Inspired by their unlikely love, Galaxy and Bernie’s sister asked, “If a rat and a cat can be friends, can’t anyone be friends?” 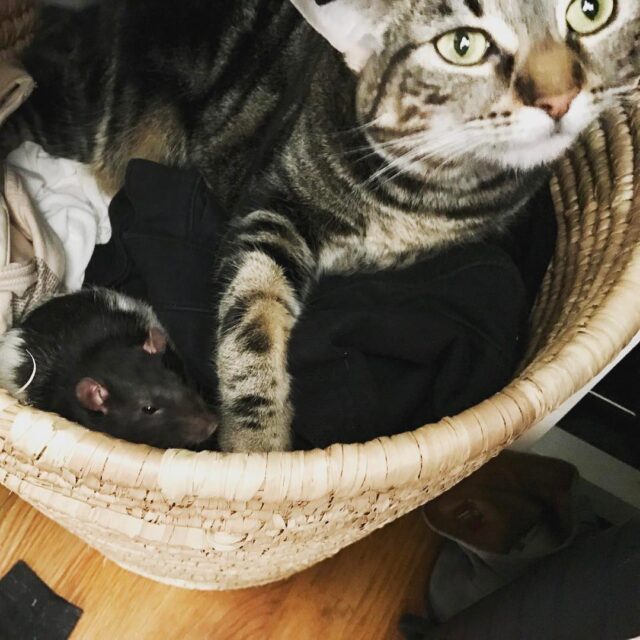 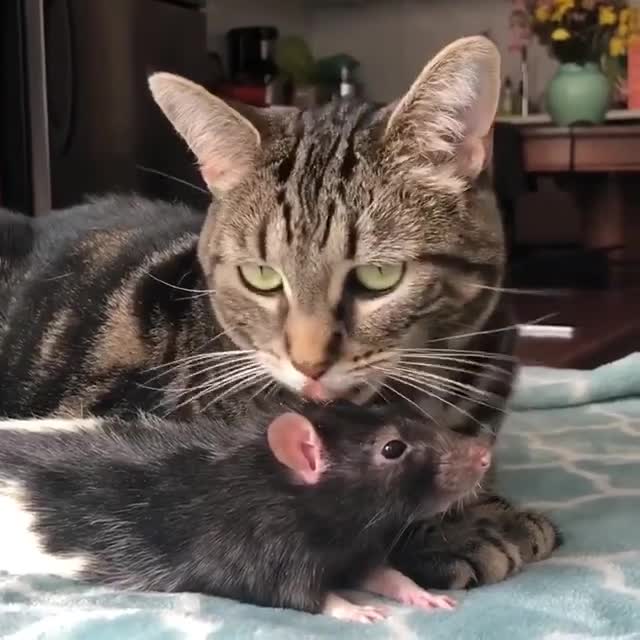 The Loss of a Good Rat

Sadly, Bernie passed away not so long ago. Don’t worry, Bernie lived his fullest life, passing away not because of any harm brought by Galaxy. Bernie’s memory lives on in Galaxy’s heart as the tabby cat never imagined she could be such dear friends with a rat. She and her family shared a touching tribute to dear Bernie on Instagram, “He died as he lived, surrounded by loving friends who cherished his sweetness and open-hearted approach to life.”

Expert Pet Care Tips | Life Hack with John Tesh
🔴 Cute Hamster and BABY BOSS go shopping in Toys Store – Cartoon Hamster by Life Of Pets Hamham
Dish Up Bone Broth for Your Cat
Motorists Bring Traffic To A Stop On Busy Interstate To Save A Family Of Ducks
Dog Does AMAZING Jump Through Gate! #Dogs #Shorts