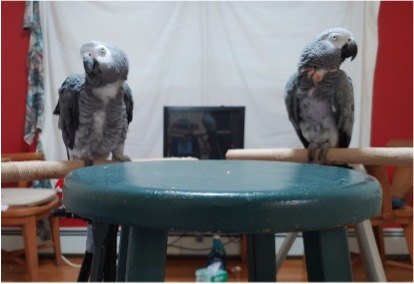 I’ve recently written, several times, about how parrots—and particularly African greys—dislike change in their lives. As prey animals, they realize that any change in their environment can be dangerous; that is, the sign of a predator. Given that (1) change is inevitable and (2) change can often be something positive, we always do our best to mitigate any negative aspects of change. For example, new students in our lab generally spend considerable time just taking care of our parrots—chopping vegetables for breakfast, changing floor papers, etc.—until Griffin and Athena realize that they are not a threat. And, of course, we always “play” with a new toy to show it is safe before introducing it into their cages (although Griffin doesn’t care much for any toy other than a feathered roll of construction paper).

So, when it came time to move the parrots into a new space…where almost everything changes all at once…you can imagine that we had considerable trepidation about how well they would adapt. As it turned out, we weren’t very good at predicting their individual responses. Thus, this blog is more a description of the event than a manual on how to manage a move—although, from experience, I do advise that, if at all possible, it is best to organize their living space and everything around it before they are introduced to their new area, so that they can start habituating immediately.

In terms of history, Griffin is far from a novice at moving; Athena has also experienced several relocations. We transferred Griffin from his hatch-place in Georgia to a lab at the University of Arizona. From there, we moved him and Alex to space in the Media Lab at MIT in Massachusetts. After my position there ended abruptly, he and Alex spent several months at the home of a friend until we could arrange for lab space at Brandeis University, where Arthur (who had joined the lab at MIT and spent the interim with a friend in New York) returned to the flock. Both Alex and Arthur passed away while we were at Brandeis, leaving Griffin briefly on his own.

We soon arranged lab space for Griffin at Harvard, and shortly thereafter added Athena, which was yet another change for Griffin. And even while at Harvard, because of construction, we moved from the basement to the 8th floor and back—twice! And then, thanks to COVID, we hastily evacuated from Harvard, settling into a third-floor bedroom at the home of one of my RAs. My RA had signed on for 8 weeks; thus it was definitely time to move on after 18 months and a lessening of COVID restrictions! We recently found a spacious two-bedroom apartment that provides plenty of room for training, testing, and storage, and looked forward to ramping up our research. However, it did mean yet another change for Griffin and Athena.

Feeling at Home in New Home

Specifically, given the totally different floor plan compared to our previous living situations, we couldn’t do much about making things look as they had in any of the earlier spaces. All we could do was put Griffin’s and Athena’s cages in the same relative arrangement—and both cages in the same arrangement to the main door as had been the case at Harvard—and hope for the best!

Given the two birds’ personalities, we expected Griffin to be much more perturbed than Athena. Over the years, we’ve noticed that Athena is a bit more open to interacting with novelty than Griffin; we are not sure why, but she has always been that way. Although she does like to see us play with new toys and eat any new food before she accepts either as safe, she has never had any fear of strangers. Griffin, in contrast, is sensitive to any change. Thus, when it came to settling into their new space, we were quite surprised that Athena actually has had more issues than Griffin.

Although we did everything we could imagine to make the move as trauma-free as possible, Fate intervened in guise of the arrival of the groundskeeping crew on our very first day. I and another RA had the birds in one of the bedrooms while another RA was setting up their cages in the living room, and all of a sudden, weed-wackers and leaf blowers were blasting right outside our window. Both birds spooked, and it took quite a bit of soothing to calm them down.

But once they were in their cages, Griffin settled in almost at once. Granted, the new breakfast spot wasn’t quite to his liking; he lost about 20 grams the first week, but quickly gained it back. Athena, however, was, and still is, often unnerved by the sounds of footsteps from the apartment above us. I’m sure she thinks they indicate some kind of nasty predator, particularly after we have left for the night. She seems less and less nervous each day, but still spooks from time to time and has been plucking her chest feathers.

Given that we can’t do anything about the noise, we’ve taken to ignoring it and acting as though it is simply part of the normal course of events, figuring that if we act nonchalantly, she eventually will do so as well. We talk to her soothingly if she does something like fly off a perch after some particularly loud sound (she knows she’s supposed to fly only on command, so we know that such flight is definitely a response to something she finds particularly scary), but we attempt not to make too big a deal out of the incident—we are trying to get her to habituate, not to think that spooking will lead to increased attention from the RAs.

Interestingly, as expected, Athena is much more comfortable with the several new RAs than is Griffin, and we are hoping that both birds will soon adjust fully. The good news is that they both are beginning to get back into the “research groove,” where we work on several different types of experiments on any given day. Whether all the activity simply serves to distract them, or whether it reminds them of “life before COVID” doesn’t really matter—what does matter is keeping them happy and healthy!