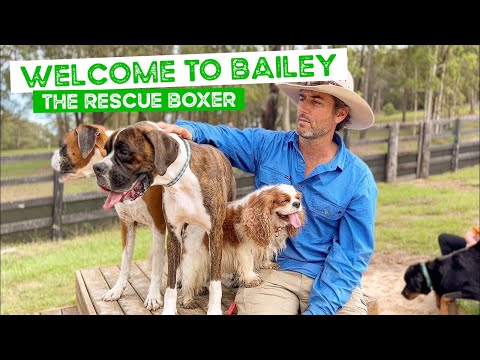 Sadly he has had to be surrendered as his 70 year old owner is in hospital and can no longer care for him.

He was going to be surrendered to the pound, but Boxer Rescue Network Australia stepped in and saved him. They were concerned a dog with such limited social skills might not make it out of the pound.

They called us in an emergency effort, and here he is.

He was described as a dominant dog. And yes he is showing all the typical dominant behaviour of an unsocialised dog. Mounting, pawing, posturing, growling and these behaviours can escalate in an uncontrolled environment.

But boy is he responsive already to some initial training. Imagine what he’ll be like after some real time invested and some positive social experiences like all the ones he’s going to have here at the farm.

He’s got a lot of learning to catch up on but we’re super happy to have him here at the farm. Welcome Bailey.