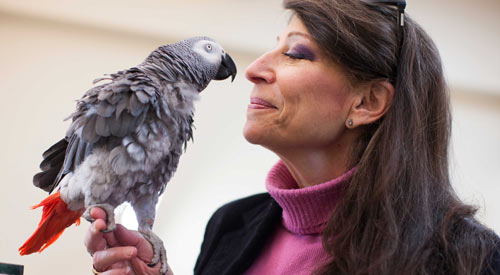 I recently gave a talk that reviewed Alex’s numerical competence and realized that I had never discussed this issue in a blog. The material is far from new, but worth reviewing because Alex’s number studies were unique in several ways. Not only was he the only nonhuman who used vocal labels (rather than, for example, a point to a specific group or Arabic numeral), but he was also trained in a very unusual manner, and outperformed some of the other nonhumans on certain tasks as well. I’m not going to discuss all of Alex’s number abilities here, because then this blog would be as long as a book chapter! But I’ll start the process this month…and, as the saying goes…“to be continued!”

Alex’s ability to vocally produce his number labels gave us certain advantages. First, we didn’t have to control for inadvertent cuing, such as somehow indicating which numeral he should choose from amongst a physical set (the ape studies were extremely careful, but they did have to include these controls). Second, because he could say anything he wanted—even non-number labels, for example—we could find out a bit more about exactly how he was processing information—something I’ll discuss briefly below and more in subsequent blogs.

How We Learn Numbers

Now, when children learn their numbers, they start with the label “one.” Usually, they are about 2 years old before they begin to understand the concept of “one” versus “many.” It takes about another nine months before they understand “one” versus “two” versus “many,” and another five months to add “three” (see Carey, 2009). Around that time, they also begin to repeat a number line in order (e.g., can list their numerals, often well beyond “three”), although, at first, they don’t generally say them in the correct order.

However, even when they get the order correct, they understand the line about as well as they understand their ABCs at that point, where they think LMNOP is one letter. They’ve just learned what is essentially a rote phrase. A few months later, about the time they add “four,” they gain a critical insight: They recognize the connection between their number line and the numeral labels they have learned to associate with quantity, and realize that each successive numeral in the number list is exactly one more than its predecessor (Carey, 2009). They then quickly understand what the next numbers in the list mean, and no longer have to be taught each number in turn. Alex, however, didn’t learn his numbers this way!

We actually started training him on “three” and “four,” because he already knew something about those labels—he already knew to identify a triangle as “three-corner” and a square as “four-corner.” Thus, he could already pronounce those labels and he probably understood something about their relationship to the quantities of corners (if nothing else, that the square had more “corners” than the triangle). It took him a few months of Model/Rival training to transfer use of these labels to a few sets of objects. We then of course had to test him on novel sets, so that he couldn’t be responding based on things like mass, density or contour. In order to claim he was answering with respect to number, he had to be able to identify three big pieces of wood as well as three small pieces of paper, and do the same even for objects for which he had no labels! “Three” and “four” had to mean the same thing for every possible set of items.

We then introduced “one” and “six.” It took another two months for him to learn “six.” Interestingly, it took over a year for him to learn “one,” because it seemed that he didn’t understand why it was necessary…he had always been able to obtain a single object by just saying its label, so insisting that he now add a number label appeared to confuse him, even though the question was “How many?” instead of “What’s here?” He had previously occasionally made what we called  “generic” errors on other numbers, when he gave us only the label of the object in response to “How many?” but for “one,” the problem at first was not occasional! It took quite a bit of training to get him to attend to what we wanted.

We didn’t start training him on “seven” and “eight” for many years, because we were doing many other studies. He learned “eight” almost immediately because he knew how to say the label “grate,” but “seven” took about a year…he kept saying “sss-one,” again omitting that difficult “v” sound. I’ll come back to “seven” and “eight” next time because those numbers were part of a very important, separate study (Pepperberg & Carey, 2012).

We had really good data early on that Alex had acquired an exact understanding of his number labels “one” through “six” (Pepperberg, 1987); he responded just like two apes, Sheba (Boysen & Berntson, 1989) and Ai (Matsuzawa, 1985), who had also learned the meaning of these Arabic numerals. Thus these three nonhumans had done something far beyond what other nonhumans had achieved. Most nonhumans (and children before they actually learn their number labels) have a limited understanding of quantity; they engage in something called the “approximate number system” or ANS (see Halberta & Feigenson, 2008).

Specifically, almost every nonhuman studied can demonstrate exact numerical understanding of “one,” “two,” and “three,” but then get fuzzy at the larger numbers. When asked to identify “four,” for example, they confuse the quantity with “three” and “five.” And as the numbers get larger, they make more mistakes and the range of errors widens, too—so if asked to identify “eight,” they not only often confuse it with “seven” and “nine” but also with “six” and “ten”…thus, they understand only “approximately eight.” When Alex and the two apes erred, their errors were usually random, caused by lack of attention, rather than produced as an approximation.

Of course, to be certain that Alex really did understand his numbers, we had to eliminate other confounds in addition to mass, density, and contour. We thus made sure he could identify objects in random arrays (see Figure 1), so that he wasn’t recognizing a pattern (think of dominoes or dice, or triangles and squares). We also needed to show that he could identify subsets (e.g., “How many cork?” versus “How many key?” Figure 2): Young children who don’t quite understand their numbers cannot separate out subsets (Greeno et al., 1984; Siegel, 1982). We also had to ensure that, unlike some nonhumans who understood large numbers only approximately, Alex wasn’t doing something like clumping small groups he could recognize with the ANS (e.g., learn that two groups of three were “six” without actually understanding “six’). We, therefore, gave him a complex task given to humans (see Figure 3, Trick & Pylyshyn, 1989).

The researchers performing the study determined that humans couldn’t use a clumping mechanism and the ANS when asked to identify the number of a subset of objects defined by multiple attributes in a very complicated array (e.g., “How many blue wood?” versus “How many blue wool?” versus “How many red wood?” versus “How many red wool?”, Figure 3), but always had to perform an exact quantification for every set. If Alex were, like the humans, unable to clump in order to use the ANS, he would have made more errors on the larger numbers and his errors would always have been labels that were close to the correct response…but that wasn’t the case! He was just as accurate on the large as the small numbers, and his errors were random (Pepperberg, 1994). So, we had clear evidence that Alex could produce the correct number label in the presence of a corresponding set of objects. That was a big step in learning about his number sense.

However, you’ll notice that throughout this article, I never use the word “count” or “counting.” The reason is that counting is a very special ability, much more complicated than just being able to label sets of objects—something that I’ll discuss next time.

8 Ways to Get Kitty to Love the Carrier
Funny Animal Videos that Make Me Burst Into Tears Laughing 😂 (CUTE)
Animal Pet Care @Cocomelon – Nursery Rhymes & Kids Songs | Educational Sing Along | Explore With Me
My Forever Home – I love my two legged dog.
Cat Found Outside, So Glad to Be Taken into Comfy Home So Her Kittens Can Thrive